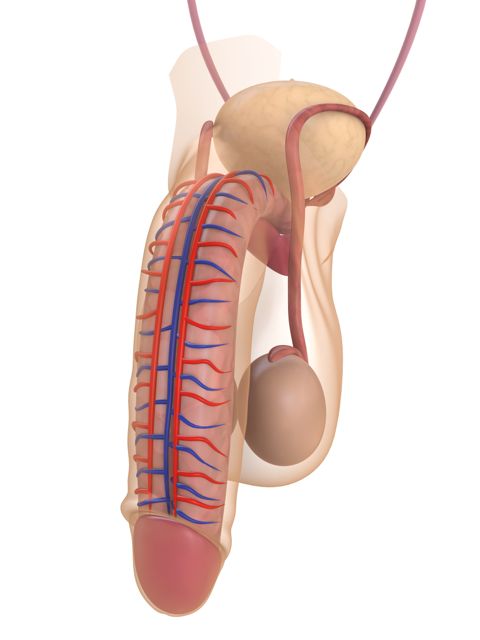 Here’s a question I get on a frequent basis….does penis hanging work?

And the answer to this question is: Yes, if you do it properly.

Now let me ask you a question.  Have you ever seen an image of some dude with weights hanging from his junk?

Penis hanging is like that, only with two major differences:

Let’s dig deeper into this method of penis enlargement. We’ll take a look at the pros and cons, and the two different kinds of hangers.

And most importantly, we’ll address the elephant in the room: does it even work?

How Does Penis Hanging Work?

At the core level, penis hanging works a little bit like a penis extender.

With penis extenders, you strap your member into a device that stretches it for a few hours. That stretching tears the tissues in your unit, and they heal back to fill the gaps.

You end up with more tissue and a larger penis.

With penis hanging, you get your extension by – you guessed it – hanging weights from your johnson. It’s the weight and gravity pulling on your penis that stretches it, but the basic mechanic remains the same.

Various tribes have been using this method for millennia, to enlarge their penises, ears, lips and other body parts.

The Pros and the Cons of Penis Hanging

Like every method of penis enlargement, penis hanging isn’t for everybody. For some folks, it’s the best thing to happen in their quest for a bigger member.

For others, it’s a lot of pain with no real gain.

Here’s what you need to know to make your own decision:

Pro: Shorter Time Frame. You can “get ‘er done” with this method in as little as twenty minutes a day.

Con: Greater Injury Risk. If you don’t warm up properly and take the recommended precautions, serious injury can happen.

Pro: No Hands. Unlike other short-time exercises like jelqing, you can use your hands for other things once you’re set up.

Con: Need Privacy. It looks a little weird, and is difficult to do casually. If you don’t have reasonable privacy, it can make this difficult.

Pro: Great Control. You can fine-tune the weight, arrangement and angles to get exactly the pull you want for any given session.

Con: Have to Start Later. This is only safe if you’ve already spent at least a quarter-year doing other, less extreme penis enlargement exercises.

There’s also a few other cons to penis hanging, but they can be avoided as long as you go slowly and don’t get reckless when increasing weights and workout length.

Con: Can Cause Nerve Damage. This can really only occur if you use penis hangers incorrectly. If you raise the weight too much for what you can handle, you’re at a high risk for nerve damage.

Con: Can Give You Ugly Dick Syndrome. This has only been reported with vacuum hangers, one of the two types of hangers we’ll discuss below. Some men report that very heavy use of these devices can make the penis “ugly” due to scarring or blistering. Again, if you go slow and don’t overdo it, you’ll never have this problem with a penis hanger.

Bib Hangers wrap around your penis on a hinge and then clamp into place. You use a small screw and nut arrangement to tighten it so it grips your member while the weights hang.

Vacuum Hangers consist of a rubber sleeve that goes over your unit like a condom or sock. You use vacuum pressure to draw out just a little air so it stays in place strongly enough to hold up the weights.

This is what creates the stretch that makes your member extend and grow.

Generally speaking (though there are differences between models), the bib hangers are more complicated to use and require you to take breaks more often to avoid damaging your penis. Vacuum hangers are easier and safer to use, but have an upper limit of 15-20 pounds.

A lot of people recommend starting with a vacuum hanger, then switching over to a bib rig once you’ve got the experience and gains to justify the extra weight.

I’m not sure I agree with that opinion, so if you don’t want to invest in two sets of equipment there’s no problem with picking one and sticking with it.

But Does Penis Hanging Really Work?

We know from several studies that penis extenders work to make a man’s member longer and thicker. But how about penis hanging?

Unfortunately, there haven’t been any real clinical trials or academic studies into penis hanging for enlargement.

On the bright side, industry surveys and anecdotal evidence abound.

According to one industry survey among men who used penis hanging…

Among the other participants, the survey doesn’t report whether they quit before seeing gains, didn’t see gains in the first four months, dropped out of the survey, or something else.

But the numbers showed that over half of the participants saw real gains in less than half a year. That’s pretty solid proof that penis hanging works just fine.

Long version: It works, but it’s not for everybody.

Penis hanging means a briefer, more intense workout session and involves more equipment and knowledge than most other natural methods of “male enhancement.”

If you go this route, be advised that injury is much more likely when compared to an extender, jelqing, edging, and other methods.

Some users have reported blisters with vacuum units, and circulation problems with bib hangers. Some even say that both methods can have a negative impact on erection quality.

Warm up well before you try either kind of hanger. Use a hot towel and wrap it around your penis for a good fifteen to twenty minutes.

Limit your workouts to 3 or 4 times a week at 20 minutes tops when you first get started.

When scaling up your workout, never add more than 1 session or 2 pounds per week. Stay consistent and know that slow and steady wins this race.

Finally, use a hot towel or a rice sock to warm up before all of your sessions to reduce the risk of injury.

If you keep at it, and stay safe, penis hanging works great for a lot of men.